News from the world of bearings

Those who have been following this blog for a while will know that I am prone to blabbering on about bearings now and again. The difference they make to a setup is negotiable but still I love them. Apologies go out to those who will find this post akin to watching paint dry…

Seismic Tekton Bearings
Originally spied and talked about here and used at Goodwood 2011 in my setup, I’ve had mixed feelings about these. 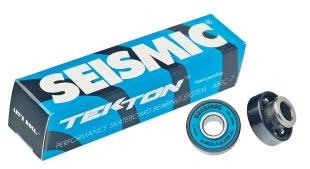 Having raced them during two marathons (Goodwood,  Rabbit Race) as well as having trained on them, I believe that I have ridden them enough to give a pretty accurate opinion. I’ve also found some pretty interesting review online that I will try to summarise here.

Out of the box these bearings at least look great, they feel really sturdy and the blue trademarked dust shields look the business. Once on the wheel good fit and built in spacer really gives you the confidence to tighten these puppies down. I got a little too carried away and managed to de-thread a lock nut, thankfully not the axel…

Performance-wise I’ve found that they run well. Here is a excerpt from the Tekton thread on Silverfish:

I don’t know why but the fastest feeling bearings I’ve used, such as Tektons and Rockin Ron’s have always sounded pretty noisy and a little loose. I’ve used Rockin Ron’s (the same set) for well over 2000 miles and they’re still going strong. They outlasted my LBL Pusher anyway.

Regarding the Tekton rusting issue, I had a set sent to my friend and I asked him to clean out the Siesmic lube and but in some speed cream (there were reports of the Tektons running slow with the original lube)…here is what he had to say:

Also, I cleaned and re-oiled the Tekton bearings and the Garvers last night. Funny thing with the Tekton’s, I dried them as soon as I could after cleaning with a hair dryer, but there was still some thin rust forming on the spacers! Crazy! So, I dried them, oiled each of them with 2 drops of speed cream, spinning each one straight after dropping the oil in, then oiled the spacers and outer races to stop the rust. I’ve never experienced that with any other bearing, and I’ve cleaned a fair few kinds!

Another user had a worse experience during a trip…

The real test was the 2000 miles and 2 1/2 months of harsh riding…with Rain, severe heat, 4-9 hours per day of riding. For the first 40 days, I used literally no lube. None whatsoever. I just didn’t see the need because that little noise coming from the tektons never changed, and neither did the ease of pushing, even after they were completely submerged for an hour in a flooded tent. A few weeks after the flooded tent I decided to try some lube because, come on how could they not need lube after so long. There was a tiny bit of rust starting to form on the axel, so I lubed it all up. That was the last time I lubed the tektons because the lube was stolen a week later. The second half of the trip ended up being rainy as all tits, and everything rusted completely over within two weeks. The tektons were ruined and I couldn’t even change them because they were rusted onto the axles, permanently.

The result was this:

So it seems that they have a super-tendency to rust up – and quick! That said I really do rate their solid feel and will continue to use them as they feel better made than many bearings out there. At $35 for 8 the price isn’t bad either. We’ll see how they get on over the Winter.

Twincam ILQ X mr2
I don’t own these yet but they are pretty rated in the world of speedskating:

Here are some features:

A fuller review is available here and on the manufacturer’s site. There are also ceramic versions available but at increased cost. The non-ceramic version shown above are priced at $45.50 for a set of 16.

Twincam ILQ-9 PRO (6 ball)
The original feature of these bearing is that they each contain 6 not 7 ball bearings.

Why are 6 balls better than 7? Less is more! The contact area between the balls and the inner and outer rings has been reduced with 6 balls, so ILQ-9’s spin with less friction that any other inline bearing. With larger balls, there’s also less void space inside the raceway, so the bearing can be filled with less lubrication, allowing more free spin.

Additionally, the larger balls (4.5 mm diameter) allow ILQ-9’s to handle greater laoding rates. This means they are superior for heavier skaters, and for stressful activities like hockey, aggressive skating, or hihg-speed pushing and cornering. I know that Alex Bangnoi uses these and they seem to be working pretty well for him! More info here. $45.50 for a set of 16

Magic Bearings
Anti-abec rating and with seals that are “not perfect; just really, really good”…but also every bearing is purple and green giving rise to  a hard choice (steezy side out or speedy side out)…

They have been, ahem, comprehensively tested:

Magics are FAST!!!!  None of the current magic bearings have died, including the prototypes I’ve had since july. Rain, dirt, general abuse, they take it. I got rained all over yesterday, went through puddles of dirty brown road-rain-water and got all nasty and gross. This morning the bearings are still smooth, though a but noisier. Looks like rain for most of the week as well so we’ll see how they hold up. And I didn’t have the luxury of spinning the wheels at 30-40mph to keep the water out.

So in review people, you should buy them because:

1. They use Unicorn semen and angel tears as lube
2. They’re purple. The color of steeze and hustle
3. But they’re also green, the color of speed
4. B*tches love Magic
5. Seals and stuff
6. They’re centerset, so you can flip them.
7. I like to think they are made out of iron man.
8. They’re Magically self aligning. Even better than Tektons!
9. They make racecar sounds
10. The lube is pizza grease.
11. They are best for sliding
12. They will make you fast like K-Rimes
13. They’re magical duh

If the performance is anywhere near the hype surrounding these bearings you wont be disappointed…and at $8.95 these are probably worth a look. More information on the Silverfish thread and here.