So I took my longboard to Amsterdam…

In the spoiler alert at the bottom of a post, I mentioned in passing the Rabbit Race which took place on the 1st October 2011. A few months back when Alex Bangnoi spotted it I ummmed and ahhhed quite a bit about whether to go or not. Frankly, I was disappointed by my performance at Goodwood back in August and so I wasn’t feeling too motivated. On the other side, I really love Holland, and more especially the few people (read longboarders) that I have had the pleasure of skating with, at various events (Skaiti, CaRott, Brussels, Paris Ultraskate) . I knew I’d regret it if I didn’t go so I booked my tickets. I’m so glad that I listened to my gut instinct as I had an awesome time!

There was no hesitation about what board to use, so the G|Bomb went in the bag along with some Swiss goodies since I was staying for free at Flavio Badenes‘ place. Once I arrived at Amsterdam airport I had a little trouble finding ‘Sport Park Slotten‘ where the marathon was to be held because neither the Tourist Information nor the taxi driver who I resorted to had either heard of it or could find it on their GPS. A quick phone call to the race organiser, Flavio Badenes and I had a meeting point: The Nieuw Slotten shopping centre. Once there, knowing that I had about 30mins until he arrived I made the most of time by nipping into a supermarket to buy varying sizes of Stroopwafels, the very best thing to accompany tea/coffee and with which I cannot live without.

Having bought the necessary items, I then sat down on a bench in the sunshine to eat a pre-race sandwich and wait for Flavio. Half way through the said sandwich I heard the unmistakable sound of wheels on pavement. It was Paul Coupe and and Rob Ashby (?) who were also having trouble finding he venue and had spotted my bright yellow Decent Hardware bag and had thought ‘this guy knows where he is going’. After working out that I wasn’t Dutch but English like them (I had said hi with a mouthful of sandwich) we chatted a bit and I told them that I was waiting for the race organiser.

A couple of minutes later Flavio arrived in his car and whisked me off to the track, having given directions to Rob and Paul. We were about 5 minutes away by car and quickly passed a huge concrete rabbit, which had inspired the name ‘Rabbit Race’:

Once we’d arrived at the venue we set about meeting various Dutch guys that were already there, including Lennart Van de Peppel. Little by little people started to arrive, I was super stoked to see Alex Bangnoi and also Giovanni Barbazza who’d came from France, but also Paul Brunninkhuis and Iemke Karun Postma with whom I’d skated with before during the Paris Ultraskate.

Once changed, Giovanni and I decided to do quick warm up lap and I was really enthralled by the course. The weather was perfect, apparently there were 4000km of blue skies over Europe that day! The later start (5pm) was really appreciated because it meant that the temperature was just right. Although the course was a bit short 2.48 km (1.54 miles) the scenery really made the course. The Autumnal colours, canals and peaceful atmosphere was only interrupted by the sound of urethane on tarmac.

At the starting line there was a really good vibe and at just after 17.10 the start was given and we were off.

Right after the starting point there was a short but steep uphill, on the warm up lap I remember thinking ‘this hill is nothing’ – something I would rethink as the race went by. The good thing about the hill is that it split up the pack really quickly at the start of the race. Going into the first corner Alex, Paul and Iemke were pretty much neck and neck. I was in fourth and just behind me was Giovanni who was really keeping the pressure up.

Then began a small game between Giovanni and myself where I would lead for much of the lap, him right behind me. On the run-up to the uphill section he would then put on a burst of speed overtaking or drawing level with me. This lasted about 8 laps and was really forced me to keep the pace high. There was once really sketchy moment after I managed to pull away quite a bit from Giovanni where I completely lost my balance. I ended up having to get off my board as it went into the grass. In a second I was back on and accelerating as hard as I could, relieved that I had not lost fourth place.

A routine started to form in my race, push 6 times with left leg, tuck into an aero position,push 6 times with right leg. At the last corner before the straight, I would start dreading the uphill, then get up the hill, and afterwards try and catch my breath on the downhill get some water/energy gel down me, wait until the speed after the downhill gets to below 24kmh and before starting the routine again.

At around the 3rd lap my body was screaming for water and I ditched the Isostar drink and I shouted to get the attention of people giving out bottles. I just couldn’t take any more sweet stuff. In the end Wizzy of Bakaboards ran along with me and ensured I got a bottle. Phew! Big thanks to him. I’m definitely going to look into getting some Elite Electrolite which is completely tasteless. The way forward if you ask me.

From about the 12th lap onwards I started to notice thanks to my GPS watch that once I’d started pushing again after the hill it would take a good while for my legs to get going again. The result that I’d push really slowly at about 18kmh compared not my usual 21/22kmh. At about the 14th or 15th lap, just after the downhill section I heard a cheerh ‘hello’…it was  Lennart Van de Peppel, overtaking me. For roughly half a lap I tried to match his pace but I couldn’t. He really deserved 4th.

The routine continued, with the hill getting harder and harder until the 16th lap when Matthijs van Wijk, who had started the marathon late and was on his 10th-ish lap caught up with me. He was in really good spirits and was in the mood for a chat. By this point I could only concentrate on one thing and apologised that I was not in a fit state to talk and skate at the same time. I felt really bad about this as he was obviously stoked to be taking part, but I was hanging! He overtook me with no problem and seemed to have lots of energy. After the race I went over to him and had a good chat…I was stoked to meet him! Here he is going full pelt down the hill.

I was really starting to feel the burn and by this point my GPS was showing distances well over the normal marathon time. Just before the last lap I was lapped by Paul (smiling) and Iemke I was amazed at the power they still had. The last uphill section was a real struggle, once I’d got to the top I felt my legs buckle but I knew I was on my last lap so just kept going. Thankfully the lap went by really quickly and soon enough I had finished the race in 5th place and had done 45km! I was super stoked as I knew that I’d done more than a marathon in just over two hours and with an average speed that was higher than at Goodwood in 2010 at 22.1kmh and therefore bettering my marathon time: 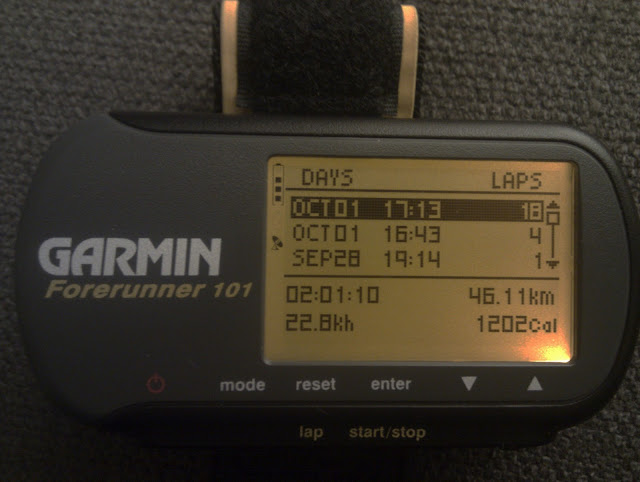 All the results can be found on the relevant post on Skatefurther. After the race there was a super good vibe. Everyone cheered on the people who hadn’t yet finished and once everyone had, and had managed cool off and rest a bit some nice prizes were handed out to the top 5 finishers. I was really surprised at this and really wasn’t expecting it. It was a nice touch.

Even after that you could tell that no one wanted the night to end. It got dark, the mosquitoes came out we were still all exchanging stories and sharing the wonderful atmosphere. At around 8pm we decided to all meet up at a local Chinese restaurant to get some food and relax together. More importantly we got to drink the post race beer which is one of the best tasting ever! In total about 14 of us were there and it was great to discuss past and future events, get to know new faces a little better and catch up with old ones. Flavio told us about his diverse history in skating, Alex about his time at the NYC leg of the Adrenalina Skateboard Marathon and we all chatted about distance skating more generally.

Once we’d said ‘Bye’ to everyone  and were back at Flavio‘s place, Alex, Giovanni and I ended up continuing the conversation until after 1am, I just did not see the time go by.

The next day Alex, Giovanni and I went to breakfast in central Amsterdam and we bought some souvenirs (tulips, Gouda) had a nice cruise around the pretty streets. Alex wasn’t even aching and looked like he could do another marathon, I certainly was feeling the previous day’s efforts so we didn’t do too much. Alex then took me back to ‘Sport Park Slotten where I watched some of the Slalom antics before heading back to the airport. My only regret was not to see Jesse Beau (get well soon) or Jochem Boer.

I’d spent barely 24 hours in Amsterdam but left feeling really as if we had managed to pack a lot in. I want to thank Flavio and the NLDSA for having organised the race and for making us feel really welcome. We will certainly be back if the race happens in 2012 as planned.  A big thank you is due to Sofie Jochems and Orta for their excellent job at timing and for taking many lovely photos. I think I almost rode into Orta as she was taking some more ‘extreme’ shots by sitting in the middle of the downhill section. Mike Fish and Wizzy of Bakaboards also deserve thanks for their pictures too.

Most of all, if you get the chance to travel to Holland and meet up with any longboarders, you can be sure to find a lovely welcoming crowd of talented and dedicated people. I for one will be making trips there as often as possible and can’t wait for my next skate with them. Who says you need hills to skate! Vooruit!

Alex‘s write up is available here (in French).