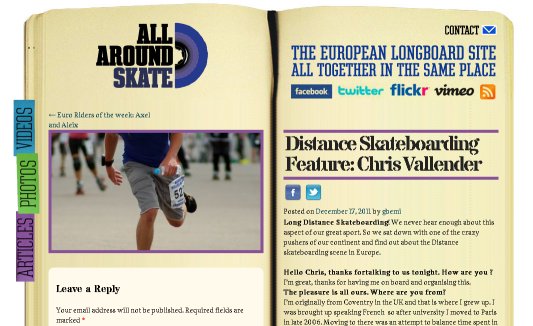 There is a thread over on Pavedwave that is almost certainly the longest that the forum has seen to date. It is called CAMBIAR- portable tweakable longboard under test — wicked!! and was started all the way back on Sun 17th Feburary 2008. The thread starts of something like this:

A buddy who lives in the city of Vancouver WA has quietly revolutionized the modern day longboard.  With one simple, unique idea, he makes it:1. quicker and easier to tweak and tune for different terrain,
2. even more portable for travel on airplanes, in cars, etc.,
3. just as high performing as other high-end longboards on the market.

The 33 (and counting) pages of this thread track the slow development that is the G|Bomb. The G|Bomb design is the brain child of a mechanical engineer and skater Mark Groenenboom, who set out to find if a drop deck could have adjustable truck angles without sacrificing performance.

At first there were no specific boards that were built for the new brackets and early prototype decks were simply cut from existing suitable shapes.

After some testing, the potential to create a full LDP board with the benefits of being lower for pushing was clearly seen by forum members and this avenue was then thoroughly explored by a handful of testers. The initial brackets although innovative and functional were not completely suited to pumping since the front truck was out in front of the board, meaning a loss in leverage for pumping. In order to correct this a new ‘bent’ front bracket was developed, but with it came a compromise. The increased pump-ability brought about by bringing the truck back nearer to the board meant gravitating away from the aim of  using a drop deck shape – although it was still lower than a traditional LDP deck.

Well back then when the foundations of this idea were being laid, I had barely started longboarding and the term LDP (Long distance pumping) meant nothing to me. As I started to get into skating distance, I got intrigued by the idea of efficient pumping and at that point it was only for the fun factor – pumping is first and foremost fun and feels awesome.

Having used a very low deck for pushing, I was (and still am) hesitant to invest in a LDP specific deck because I find them awkward to push when you have to because they are too high. Laura Hatwell on the Skatefurther site pointed me in the direction of the more recent developments to come out of the G|Bomb stables which were being talked about in the afore mentioned thread: the Illuminati. What grabbed my attention was that it was designed to be an “an all out pumper” , whilst obviously being nice and low. Another thing for me was that it was a colloboration between G|Bomb and Subsonic. A seemingly perfect fusion of two companies that I admire greatly.

Knowing that I was highly interested in it, Laura very kindly lent me her light flex Illuminati to test for a while. After setting it up (description here) I was instantly hooked. Back in May 2010 I wrote:

I was very intrigued by how this board would feel compared to a regular LDP deck like the Subsonic Pulse and also how well it would fit the description of a hybrid Pusher/Pumper.

I’m pleased to say that I’m instantly astounded with how good this board feels. If you are looking for versatile board that is as pumpable as it is pushable then look no further. It’s going to sound rather simple, but being able to adjust the truck angles the ‘on the fly’ really is a very nice touch. The metal brackets feel as strong as a tank and the quality of the board construction made by Subsonic is pretty much second to none. Purple to turquoise fade – awesome!

I wrote a couple of articles about trips I did on the board that can be read here and here. Another positive indicator is that this board is still in my possession one year on, and luckily Laura is willing to sell it to me – don’t worry she already had another one! Still, a big thanks and goes out to her for letting me initially borrow it.

The development of the brackets and G|Bomb mantra continued and soon came some tantalising picture of some lowered version of the brackets. After a review of these by Rob Thompson – I’ve had my eye on these ever since:

With the recent news that my LBL Pusher was nearing the end of it’s days, I got in touch directly with Mark to see if I could get some brackets…after exchanging a couple of emails I soon received extremely awesome pictures like this: 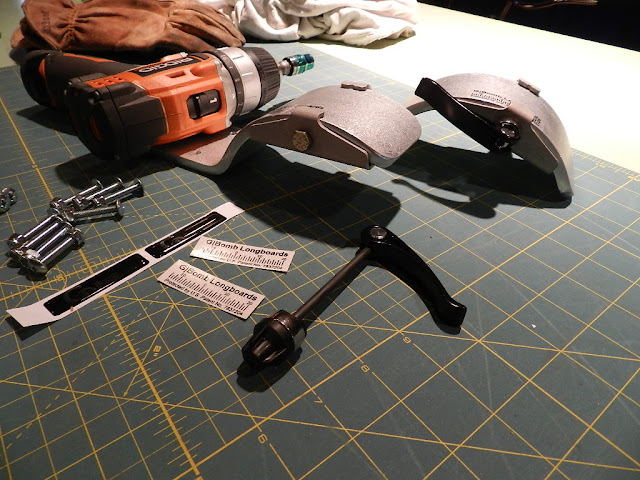 Once I received them, I wasted no time in swapping over the original brackets for the new ones – you can see the difference in the curvature of the bracket design: 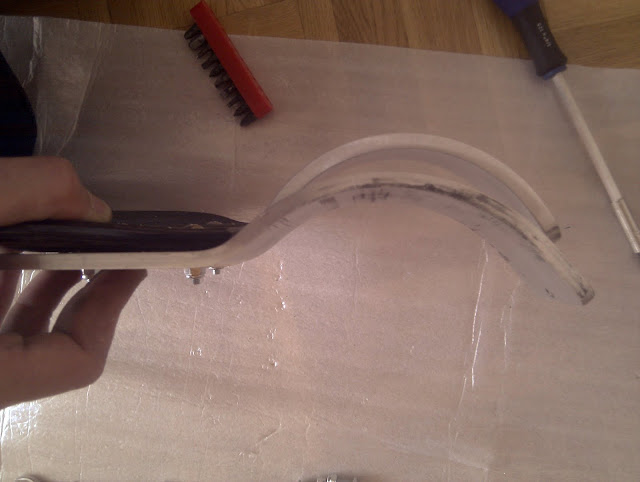 As you can see the deck is very low, about 8cm at the centre (the Illuminati has some concave in it so is higher at the edges). With the new brackets and 75mm wheels it is now just under 80mm. Before, with the old brackets and 70mm wheels it was 113mm: 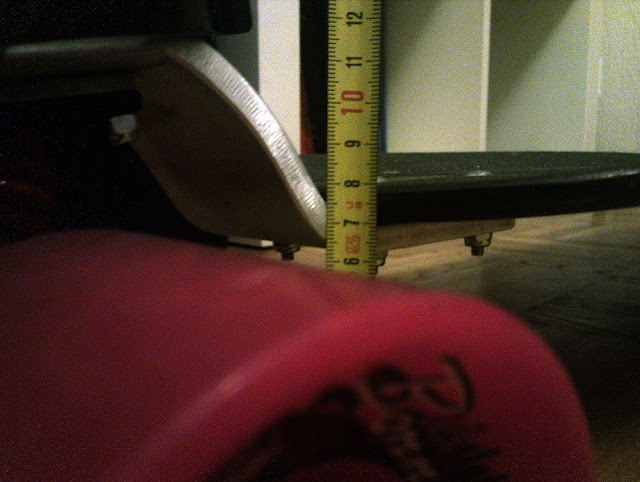 Here is a side view when put next to my LBL Pusher, there isn’t much difference considering it is a pure pushing deck: 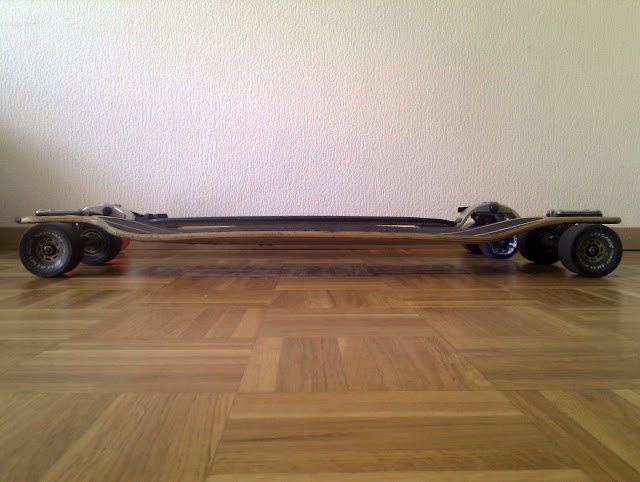 Here it is fully built from the top. As I mentioned earlier I bought some rather nice wheels from Jeff Vyain at the LongboardLoft during my recent trip to NYC, I mixed the sets of wheels up back to front at first – doh!: 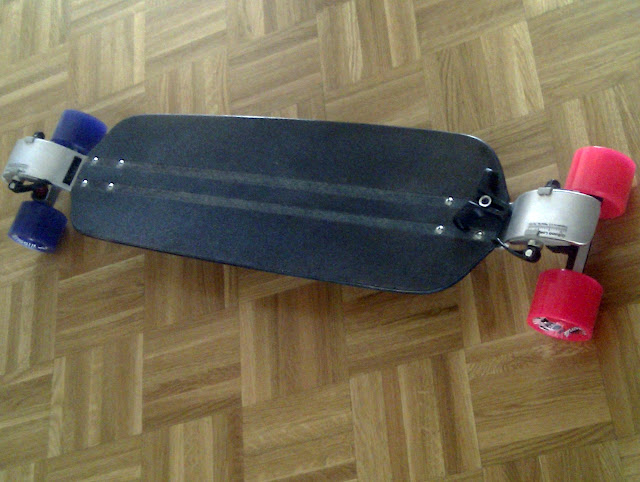 And here is the bottom, wheels on the right way, softer duro at the back :-) : 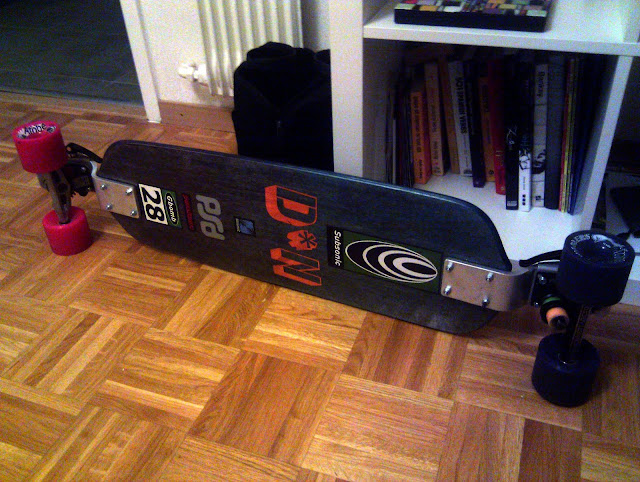 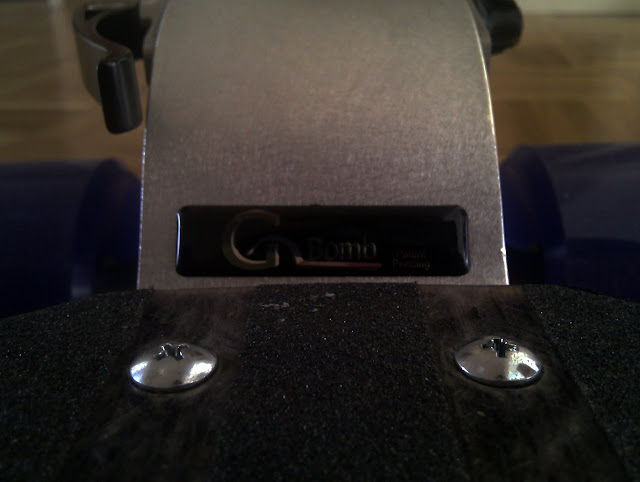 Here is the setup I am using:

– Front: Bennet 5.0 with Lime 80a Reflex barrel bushing boardside and Orange 86a barrel roadside (with rounded edges) ATOBE  Bonneville wheels 76mm 78a
– Back: Seismic 30° with red springs tightened to 2.5 turns and ATOBE Wigglers wheels 77mm 82a

I initially had problems adapting to the very turny nature of the front truck compared to my very stable setup on the LBL Pusher, but this was sorted out thanks to some experimentation with various bushings, more ramblings about which can be found here. The drop on the new brackets is set to around 30mm, and together with some bigger wheels, the whole package feels very stable and comfortably low for pushing whilst remaining pumpable. It certainly isn’t a pure LDP deck but more of a fusion. It does exactly what I want it to do which is be great for pushing whilst being really pumpable but at speed – this is key for me. Additionally, the thicker brackets have stiffened the deck substantially,  I really couldn’t be happier with this deck and setup. Last night I went for a cruise and came back grinning from ear to ear.

It is important to mention that there are future developments in the pipeline from G|Bomb about which more will be known in the next couple of months. Including: Drop-thru front bent brackets, improved original 10mm drop adjustable brackets and bumpers. I can’t wait to hear more. This is one of the things which I love about designers such as Mark – it is the forward thinking, via original and high quality products that help move this industry continuously forward. I have nothing but respect for all the long hard work, effort and time that is necessary to this process. Thank you Mark!

For more information, follow the thread on Pavedwave, or this one on Skatefurther or simply visit www.gbomblongboards.com. I will be using this board at the upcoming Goodwood Roller Marathon on the 14th July.