The sandwich lived up to expectations! Thanks NYC!

As it is about three weeks since I last posted on here, I needed a recap of what I had written about last time around when I was just about to go to NYC. That’s when I was reminded about the snack that has had the greatest influence on me for as long as I remember. The Katz Pastrami sandwich. 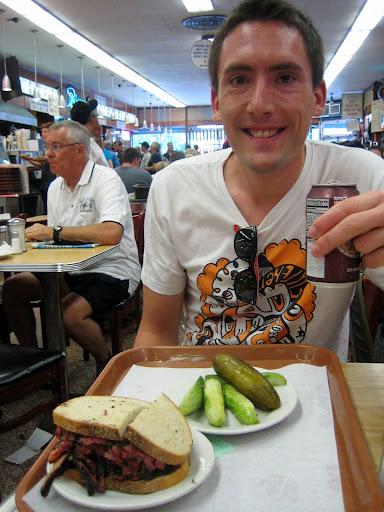 Anyway, this blog is supposed to be about longboarding, not food, so back to business.

That last paragraph wasn’t totally irrelevant though, as a about a mile away from Katz’s is the Longboard Loft at 132 Allen Street in the Lower East Side. It lives pretty well to it’s ambition of being “the headquarters for longboard enthusiasts in NYC and all over the world. With New York City’s largest selection of longboards and longboard components, you won’t find a better place to get your longboarding itch scratched”. I certainly left the shop feeling completely un-itchy, for sure!

Walking in the area around the shop already felt familiar, almost certainly from having watched videos that were filmed in the neighbourhood. Another, pointer was that I started to see a couple of people on longboards – suddenly, there is was! Once I entered I was amazed by how many boards there were, it truly was a refreshing experience to see so many brands represented: Earthwing, Tutone, Landyachtz, but also rarer boards such as Subsonic, along with the the full Bustin line up. News has it that perhaps some Swiss ones will also be stocked too… 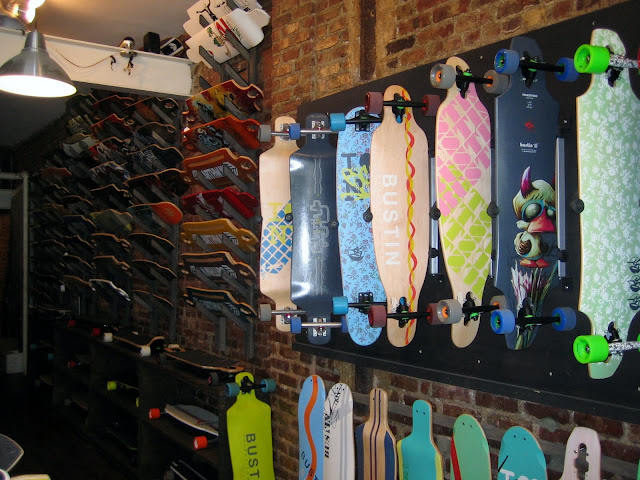 Not forgetting the wheels, too.

I got a really good vibe from the place and it really was busy. All the staff were super friendly and I was super happy to meet Jeff Vyain and have spend some time talking to him. We talked about his wheels, the Atobe Wigglers,  the upcoming Adrenalina marathons, The Chief Ladiga Silver Comet Stage Race, Skatefurther, PSD, some things cooking in the Subsonic pot and about Pavedwave and Ultraskates. It was really nice of him to take some time out of the busy-ness of running the shop – Thanks Jeff! Although I was mostly doing touristy stuff in NYC since it was my first time in the city and in the States, the visit to the shop was definitely a high point for me.

Needless to say that I didn’t leave empty handed: 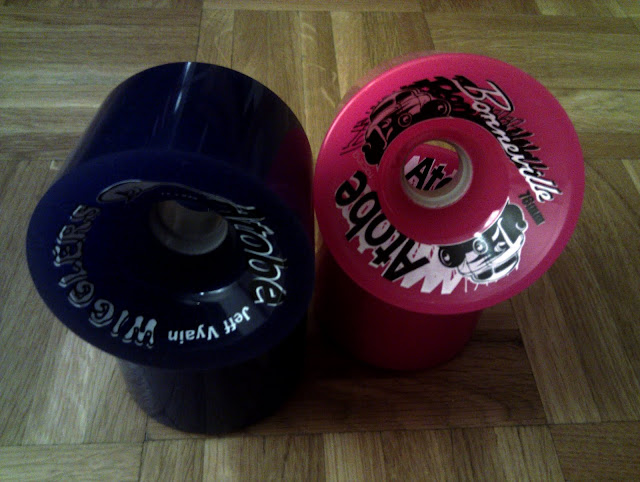 My girlfriend and I walked around NYC a lot. Like any major city it is huge, and in my experience, if you want to get a feel for the place then you have to just walk around. Having lived and longboarded in Paris, I couldn’t help but look at the city from a longboarder’s point of view. My opinion is that you have to be pretty hardcore and especially focused to skate and not run into trouble.

First off the pavements are often narrow, much narrower than is the norm in Paris and often crowded and of varying quality. There is no choice but to skate on the roads, making use of the numerous cycle lanes that are on offer. Even then it is at a level of hectic-ness that is rarely seen in Paris. I’ve found myself having a lot of the respect for NYC’s longboarding scene because of this. The result of this urban riding certainly has proved it’s worth in the many pushraces and marathons that the city’s crews have owned.

Then you have Broadway, which we walked most of the way down in sections during the week we were there…I was trying to picture being part of the front of the pack during the Broadway Bomb. Calling it challenging is the biggest understatement you can make. It is the least practical and ridable course that could be thought up, but I know that I just have to do it at least one time in my life! Wow! Central Park is the obvious exception to all this…but once you’ve skated there you’d need a little bit of calmer riding.

Too bad that I can’t make the Adrenalina Skate marathon held in NYC (Govornor’s Island) on the 30th June. As for who is going to win? Well we’ll all just have to wait and find out…one thing for sure is that Alex Bangnoi will be representing once again. Go Alex! Oh, and Jeff Vyain just posted a sustained pump at 18.5 Mph (29.7Kph) for quater mile intervals…to put it into perspective, during my final training last year I was getting about 21Kph, and averaged 22Kph (13.6) on the day itself. I’ve got some work to do!

So, last Monday I ended up going for the first session in a while. I firstly met up with Christian Schlumpf and we got down for some LDP action, he hadn’t ridden an LDP setup before so it was interesting to him go from curious to stoked! I’ve been playing around with the new Siesmic truck that I’ve recently acquired and I’m loving the kick (return to centre) that it has…

We then met up at the Vallée de la Jeunesse with Arrash and ended up meeting two other locals (including Matthieu) who seemed to really know what they were doing. They were totally nailing the DH sections, unlike me!

Since, then the weather and time constraints have meant that I haven’t done any more boarding so this post will be kept pretty short. Tomorrow I am off to visit the home of Bustin, Longboardloft, Unclefunky’s, Earthwing, Concretekings, the Broadway Bomb and Pastrami – I cannot wait!

After that week of debauchery in the Big Apple, it’ll be a relaxing few days of farniente in Spain where I’ll be mainly enjoying the playa so don’t expect too much action here for the next fortnight…after all that I’ll be back and raring to go with some reports of my adventures!

Big shout out to the people who continue to read this blog…I’ve received some really nice comments recently so thanks for reading!