Like most years the Goodwood marathon is one of the top, if not THE event in my longboarding year. It certainly is the longest and most competitive distance event in Europe to my knowledge. This time around things were no different – I’ve been focussed on how I can improve my time since I started training back in April.

Tim Pritchard and I arrived early enough to set up a camp and generally collect our starter packs and get ready. The couple of hours before the race went by in a flash. I made some adjustments to my setup and after some stretching was ready for the off.  Tim, Matt Elver and I made our way on to the track together and snaked through the masses of lycra-clad rollerbladers, many roller-derby girls and got pretty near the front. With a little bit of manoeuvring and some grumbling from those around us we managed to get our boards down. The race marshals counted down from 10 and we were off. After about 10 metres Matt got knocked or tangled up with another rollerblader but other than that the start was clean and problem-free. 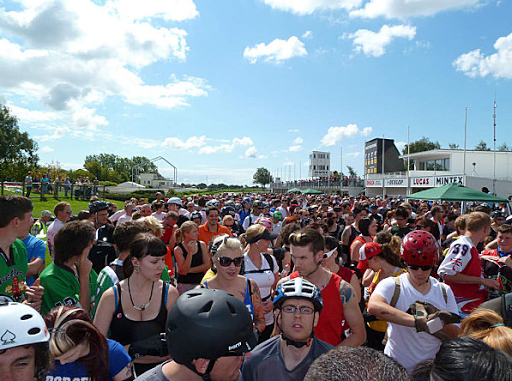 Tim and I got into a fast pace and the first lap really flew by. During some sections of the first lap he pumped and I managed to keep up by pushing as hard as I could, but only just. I should have pumped too but didn’t want to loose valuable time changing my stance but I was already aching and didn’t feel like I’d warmed up enough. After crossing the line for the second lap we were soon passed by Matt who seemed on very good form. I was really taken aback by how fast Tim was pushing and really struggled to get into a rhythm. After turning into the section of the track where there was a headwind I was lagging further and further behind. Pausing to drink some water proved a step to far.  Tim put in a few power pushes and just pulled away, I couldn’t keep up.

My breathing was all over the place and I decided to pull back a little, in the hope that if I maintained a high average speed then I could possibly catch up with Tim again in the later laps of the race. I had successfully done this the in 2010 with Alex Bangnoi. Soon after, I then also got overtaken by Ben Williams on a rather funky LBL Pusher V2 and Moe Neve. Shortly after that I managed to get into a good zone.

For the next laps, I pumped on every downhill and  straight where the wind was behind me or in the downhill sections and and pushed the rest of the time. It is at this point that I versitality of the G|Bomb showed through. Being able to pump the board was a very welcome break from the pushing. I also found that I was much quicker when I was pumping compared to when I was pushing. This was most noticeable on the flat or gradual downhill sections of the circuit. Along these sections I maintained speeds of around 24+ kph (15mph) compared to 20-ish kph (12.5mph) when pushing normally. I felt really comfortable on the G|Bomb  and I was pleased that I had adjusted to it in such a quick time. I have found my ultimate race board. 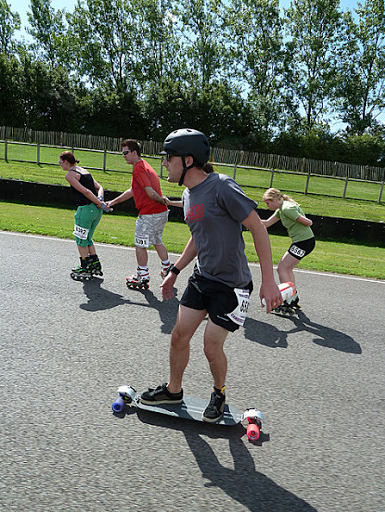 As the counter on my GPS climbed above the 43km mark at around the 2 hour mark,  I started to wonder how many laps I’d done. One error was that I didn’t carry a pen with me and being focused on pace, I’d not really paid attention to the number of laps I’d done. I really didn’t want to be one lap out so decided to do another, in hindsight I did this perhaps unconsciously to honour Alex Bangnoi with whom I’d raced around with for an extra lap at Goodwood in 2010. ;-) 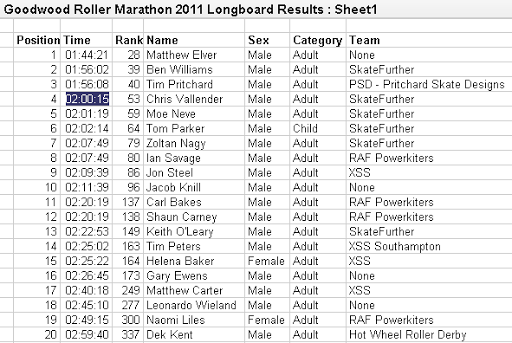 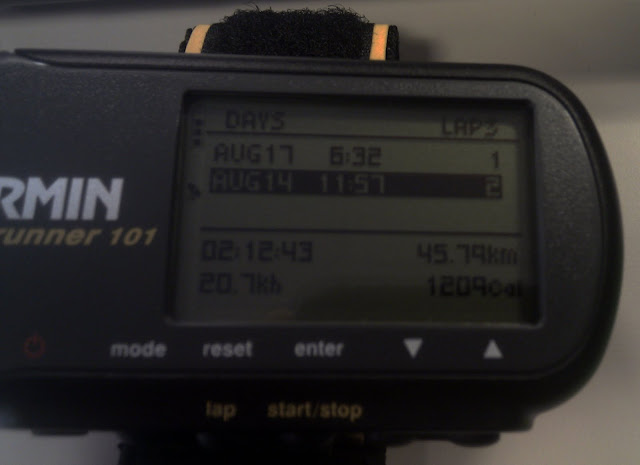 Since the race I can’t help wondering why I was slower. I’ve tried to change many things in preparation for this year’s race, from looking into different techniques by reading the Chi-Running book to uphill training with the aim of improving strength. I perhaps made too many changes and don’t think that I ate right on the day. The previous day I hadn’t managed to resist a couple of beers either – schoolboy error!

Additionally, given my time in 2010 I may have been a tad over confident, it may have also been the headwind too. Who knows. One thing is for certain, I really feel that I got the setup right this year with the  G|Bomb although I may tweak a couple of aspects. I will also look at the pushing and tucking method, especially for use in headwinds. I also want to train for longer distances and give up on the grueling short uphill strategy as this isn’t fun. Regardless of my performance I had a really great time with everyone and had a great day.

This is the complete setup I used:

More importantly, Goodwood like the other longboard events that are too-few, is also an unmissable opportunity to meet and get together with fellow longboarders. It was great to see such people as, Keith O’Leary, Tom Parker, Nick Randall, Zoltan Nagy, Ben Williams, Moe Neve  Jon Steel, Chris White,  Gary Ewens, Matt Elver and not forgetting Tim Pritchard. Laura Hatwell was sorely missed though as were the other members of the Skatefurther family who weren’t able to make it.

It was also great to oogle at some really very nice setups, mainly a brace of G|Bomb Illuminatis and the urban legend that is the Longboard Larry Pusher V2.

Another awesome aspect was that the PSD footstops was really well received and deservedly so. Quite a few people bought a one on the day and all feedback on them was great. Here are several in action.

It was really nice to have to time to chill with some of the others after the race. After a good rest Tim, Keith and I went for a chill lap in the Summer sunshine. The circuit really is an amazing skate…

Tim summed it up nicely in his write up, which includes his impression of the G|Bomb:

Keith, Chris and I took the opportunity to ride the super smooth circuit for one last lap. All 3 of us pumping and using my footop’s which was another great feeling. I took a ride on Chris’s G|Bomb Illuminati, extra low brackets, Bennett front 17* Seismic red springs -7* and AToBe Wigglers/Bonnevilles. It was far more stable than my top mount LDP and return to centre equally, turning equally and less like a fish weaving. The pump feels much more centred, you kind of make longboard type turns, and it pumps/accelerates and you can make tiny pumps with your toes/heals dipping. The height is really low which felt pretty normal, until I stepped back on my board which felt enormous. The G|Bomb certainly has potential for a true pusher/pumper, but, I may well stick with my Pulse? The mega quick alteration of angles on the G|Bomb is also a massive advantage, I’m sure we all agree, especially front and back for us LDPers. I’d love a G|Bomb, and I have no doubt that it could be my ideal board for a race, but, I may never know.

New strategies, more training but the same board – bring on next year already! Tim’s write up of the day can be seen Pavedwave and all the results of the day’s racing are here. A big thanks goes out to the organisers for putting on such a good event!